Previous day’s report ended with this ‘The PLR (Path of Least Resistance) for the coming session would be to the downside if NF gets accepted below 12130 with the 12165-12170 being important supply zone for the next few sessions.‘

NF opened above the HVN of 12130 and took support at the weekly VAL of 12117 in the opening minute which led to a probe higher towards the HVN as well as previous week’s POC of 12162 as the auction almost tagged the same in the first 5 minutes itself but got stalled at 12159 indicating that the sellers are very much active in this zone after which the auction made a swift move lower not only making new lows for the day but went on to break below PDL (Previous Day Low) as it tagged 12071 in the ‘A’ period which was the mid point of the gap zone of 11th Feb as demand seemed to have returned here which could be seen in the form of a small buying tail from 12095 to 12071. The day had 2 opposite forces in play as could be seen in the singles at top too in the IB (Initial Balance) which was from 12123 to 12159 which then made the auction to coil for the next 4 periods as NF stayed in a narrow range between 12090 to 12120 building volumes around 12105 before the ‘G’ period made a move to the downside making a RE (Range Extension) lower followed by marginal lower lows in the next 2 periods as it tagged 12056 but was still unable to close the gap of 11th Feb completely nor tag the 1.5 IB objective of 12028 which meant there was a good chance of the day ending as a Normal Day as NF continued to rotate around the IBL before it made new lows for the day at 12052 in the ‘K’ period but was swiftly rejected ending any chance of a spike lower and made a quick probe to VWAP as it left a PBH (Pull Back High) at 12092 in the ‘L’ period before closing the day at the DPOC of 12075. Value for the day was lower so the PLR continues to remain to the downside with 12092 & 12124 being the new references to watch for new supply coming in. 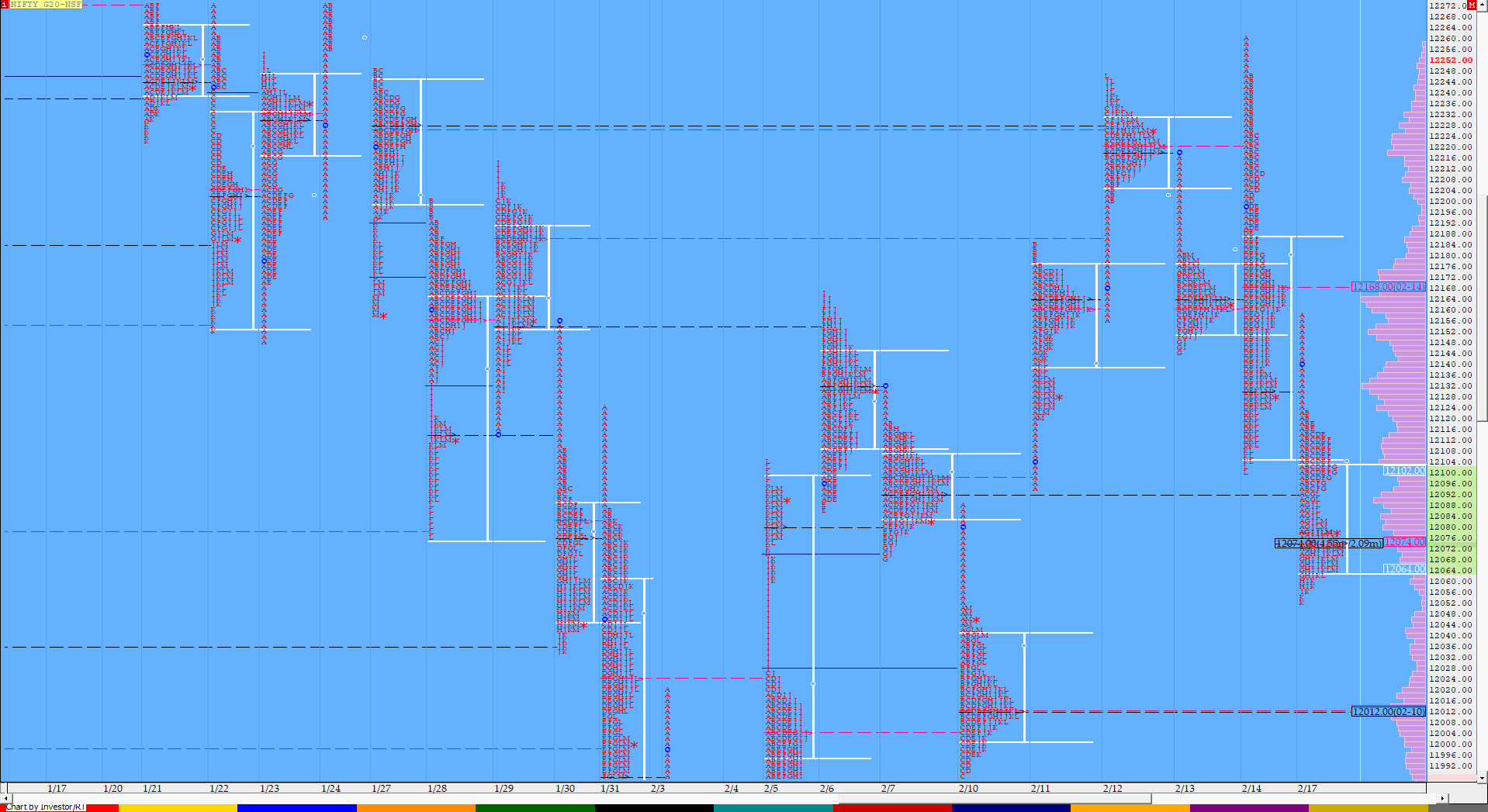 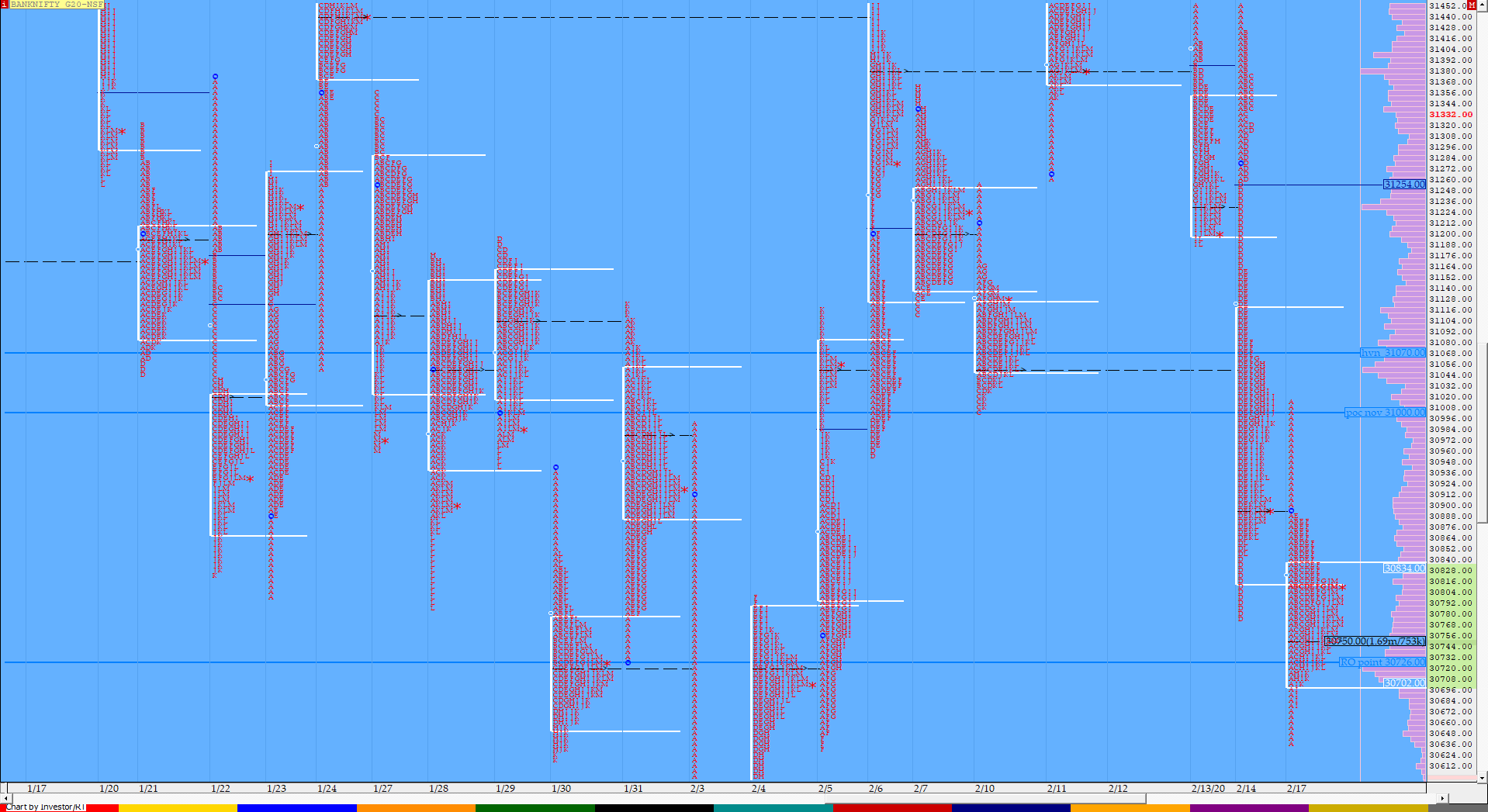 BNF opened in the lower distribution of Friday’s DD profile and made a quick probe higher as it tagged 31015 but was rejected as it made an equally fast move to the downside getting into Friday’s buying tail of 30850 to 30774 and went on to break below PDL as it made lows of 30640 all in the opening 10 minutes. The auction stopped right above that positional reference of 30631 (the FA of 5th Feb which has not been tagged) which indicated that the objective to the downside for now could be over as BNF then remained in this opening 10 minute range of 375 points all day to leave a 3-1-3 profile (tails at both ends with a nice balance in between) and a Normal Day. Value for the day was mostly lower so the PLR remains to the downside with 30750 being the first support level below which we have today’s small buying tail from 30681 to 30640 as the next reference. On the upside, the auction will need to sustain above the PBH of 30820 for a test of today’s selling tail from 30891 to 31015.