NF opened with a big gap up of 145 points right in the previous day’s selling tail with an almost OH (Open=High) start at 8974 and began to probe lower making a quick fall of over 100 points as it made a low of 8860 taking support at previous day’s prominent TPO POC after which the auction reversed to the upside and made new highs of 8992 in the ‘B’ period leaving a buying tail from 8934 to 8860 in the IB (Initial Balance). NF then made a C side extension higher to hit 9035 but failed to extend any further in the D period as it made similar highs of 9033 and the stalling of the auction just below previous week’s low of 9037 indicated that the supply was coming back in this zone which led to a test of VWAP which was broken in the ‘E’ period as NF made a low of 8937 but got support just above the morning buying tail and this was a sign that the buyers were also defending their zone. The next 2 periods then saw a probe higher once again getting above the IBH but once it confirmed a PBH (Pull Back High) in the ‘G’ period, the sellers got more aggressive and made a trending move lower over the next 3 periods as it not only negated the morning tail but went on to make marginal new lows for the day at 8852 in the ‘J’ period. NF then formed a small balance in the lower part of the IB for the rest of the day as it left another PBH at 8923 building volumes around the 8900 level where it eventually closed leaving an inside bar on the daily with overlapping to higher Value. The 2-day composite of this week still resembles a ‘b’ shape profile with the POC at 8889 and is right now in balance mode in the 2-day Value which is at 8844-8883-8977 (Click here to view the MPLite chart) 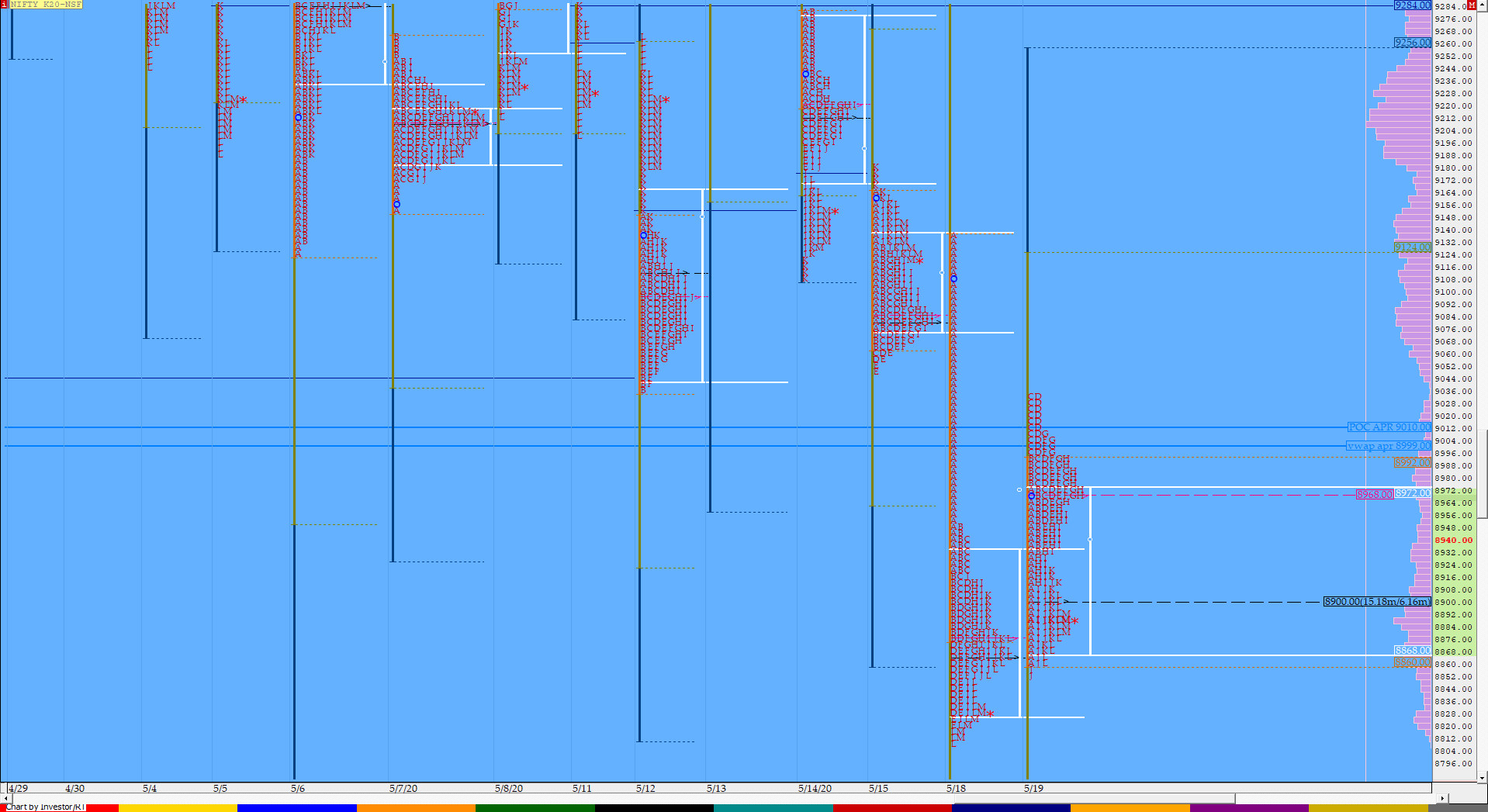 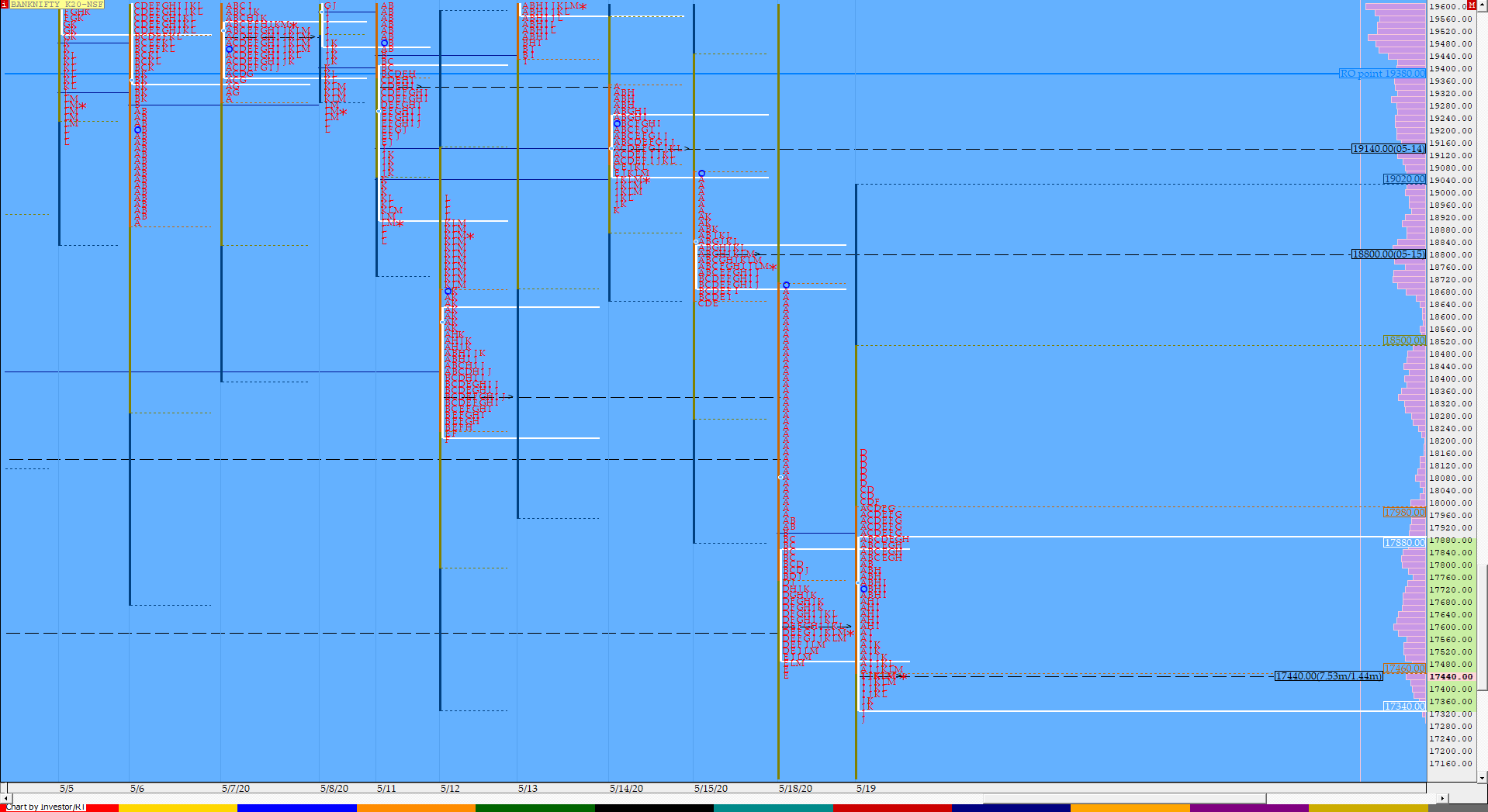 BNF also opened with a gap up and made highs of 17993 in the opening minutes as it got rejected from previous day’s selling tail and made a quick drop lower almost testing the PDL (Previous Day Low) as it hit 17465 in the ‘A’ period from where it reversed the probe once again to the upside. The auction then made a ‘C’ side extension to make a new high for the day at 18049 and followed it up with another RE (Range Extension) in the ‘D’ period as it hit 18165 but just as had happened in NF, previous week’s low & for now the monthly extension handle of 18209 came into play as important supply zone which triggered a reversal for the day. BNF took support at VWAP in the first attempt in the ‘E’ period after which it left a PBH at 18014 in the ‘F’ after which it made a big OTF (One Time Frame) move lower till the ‘J’ period making multiple REs on the downside as it made new lows for the week at 17318 but could not complete the 1.5 IB objective and ended up as a Neutral Day with a close right at the day’s POC of 17440. The 2-day composite in BNF has Value at 17491-17606-17974 which would be the zone to watch if the auction stays above 17440 in the next session.