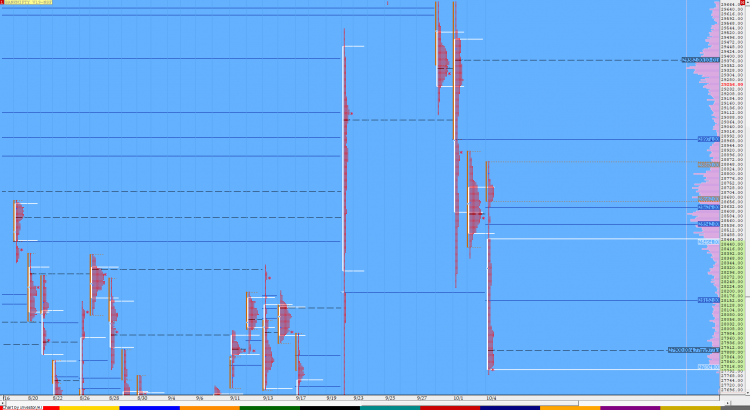 NF opened above PDH with a gap up of 50 points and made highs of 11430 in the opening minutes but did not find any new demand as it got back into the previous day’s range & remained below 11418 to confirm an ORR (Open Rejection Reverse) and went on to make lows of 11389 in the ‘A’ period leaving the narrowest IB (Initial Balance) range of the series of just 41 points raising chances of a multiple IB day. The auction continued to balance in this range for the next 3 periods advertising opportunity and waiting for a OTF (Other Time Frame) player to make an entry as volumes were getting accumulated at 11400. NF then made an attempt to probe higher in the ‘E’ period making a brief look up above the PDH which saw swift rejection and this started an initiative move to the downside as the auction left an extension handle at 11372 and went on to make new lows for the week at 11285 in the ‘F’ period completing the 1 ATR objective from the weekly FA (Failed Auction) of 11607. The ‘G’ period then saw NF make an inside bar giving a pull back to VWAP where it got rejected after making a high of 11370 displaying characteristics of a Trend Day developing as it made a fresh RE lower in the ‘H’ period making new lows of 11266 but gave a pull back in the ‘I’ period to get rejected at the PDL (Previous Day Low) marking a high of 11313 and followed it up with lower lows in the following 2 periods as it completed the 5 IB range down in the ‘J’ period while tagging lows of 11218. The auction then gave another pull back in the ‘K’ period as it hit 11278 and went on to make the last leg lower for the day as it made new day low of 11201 in the final minutes completing an ideal Trend Day. The auction has closed in an imbalance so can expect the same to continue at open in the next session before balance returns.

(Click here to view this week’s action in NF) 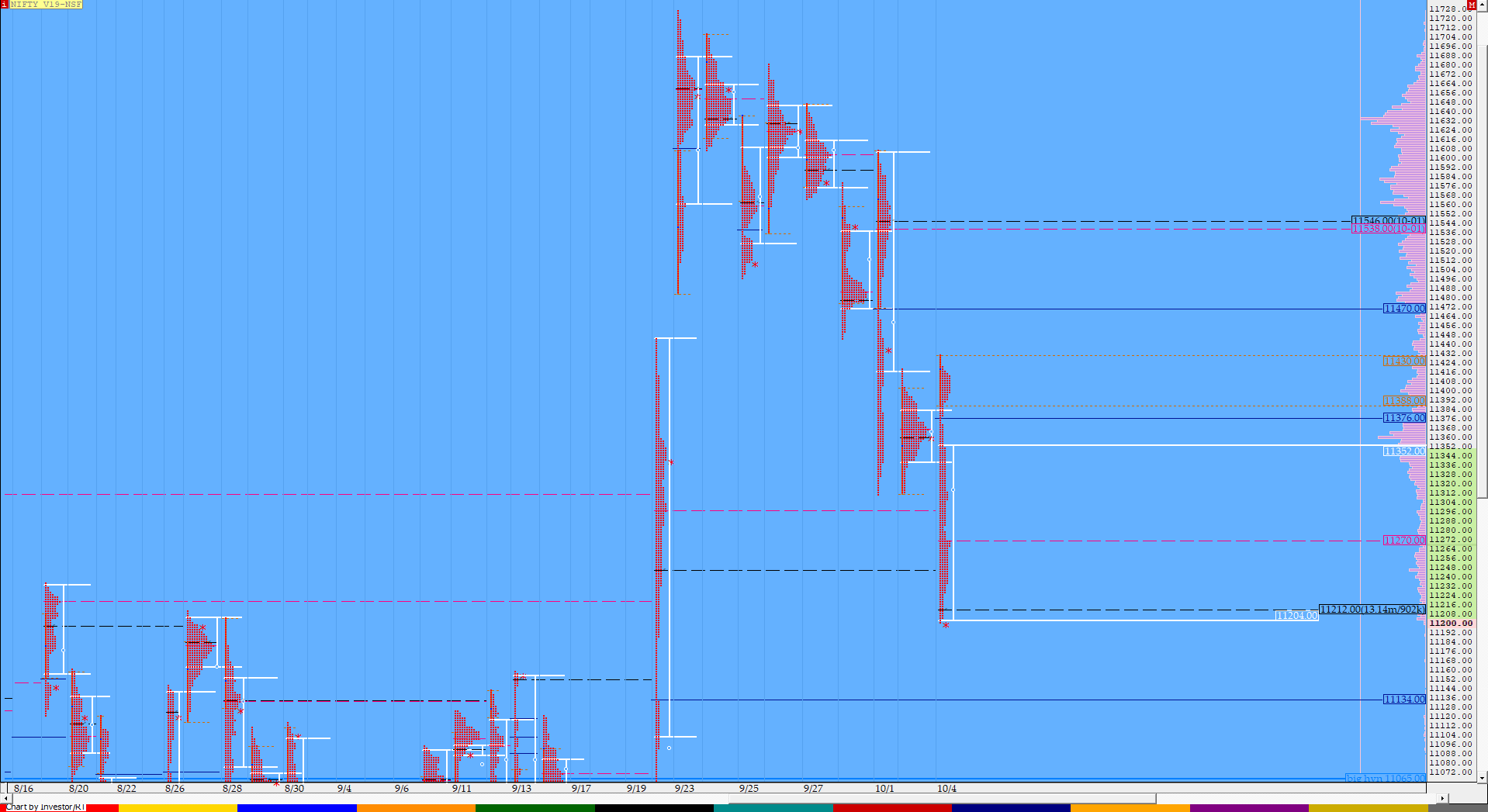 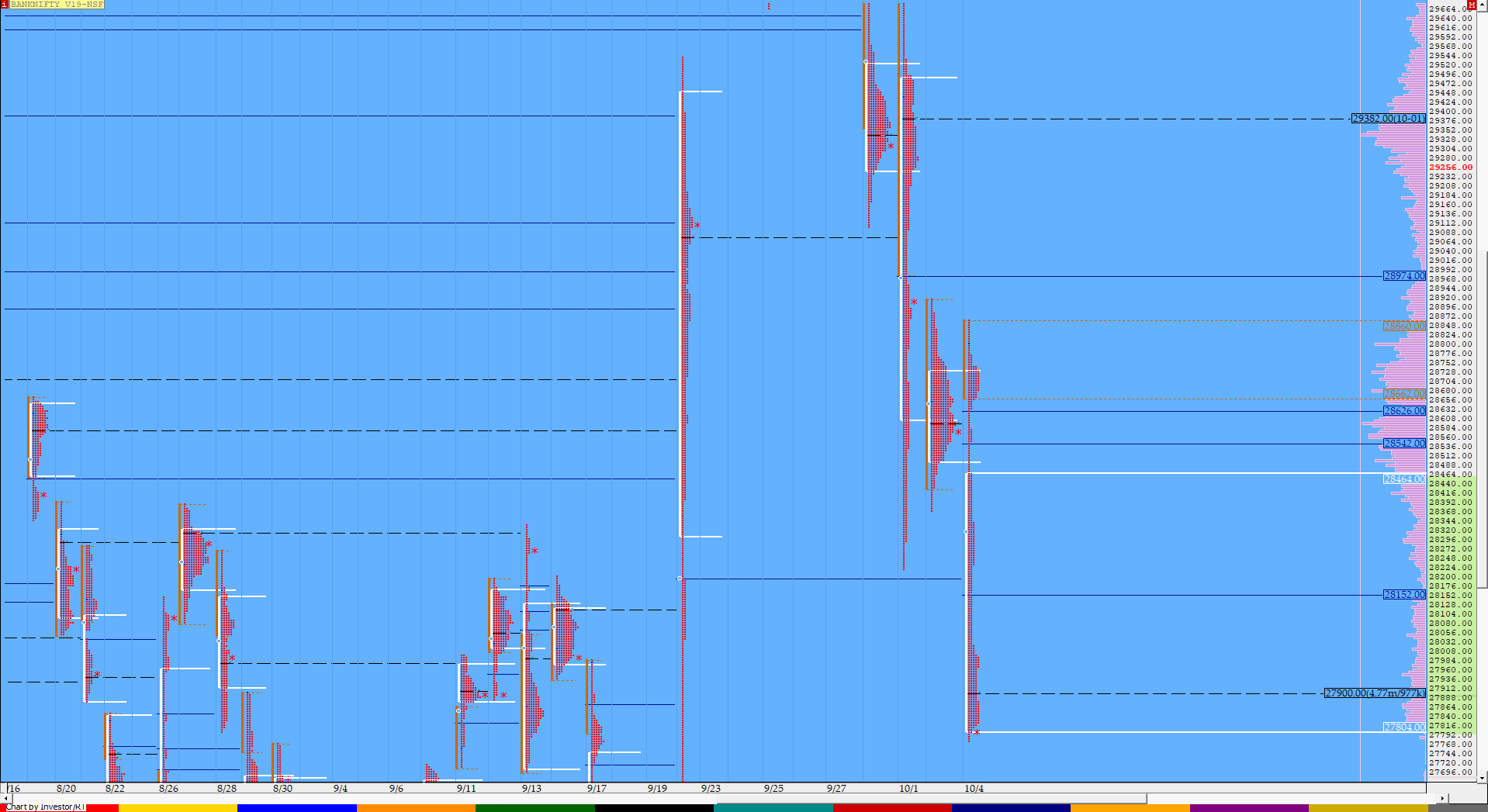 BNF also gave a higher opening with a gap up of 200+ points and went on to tag 28860 but could not get out of the lower distribution of the 3-day composite DD (click here to view the chart) after which it made lows of 28667 to leave a narrow range IB of just 193 points. The auction then made a ‘C’ period RE making new lows for the day at 28632 but did not find new supply as it got back to VWAP and made highs of 28740. The ‘D’ period then made an inside bar once again getting resisted at VWAP which was followed by a fresh RE down in the ‘E’ period as BNF made a low of 28551 completing the 1.5 IB objective and then gave a bounce to VWAP but for the third time in 3 periods got stalled at the same zone of 28730-740 and this empowered the sellers to step up the gas as they left a fresh extension handle at 28551 in the ‘F’ period and made a big move down marking new lows for the week at 28161. The ‘G’ period made another inside bar as it gave a bounce to 28464 but could not test VWAP indicating that the sellers were still controlling the auction which got more clear in the ‘H’ period as the auction made new lows and followed it up with lower lows in the next 2 periods as BNF completed a 5 IB down day while making lows of 27778 after which it gave a small pull back to 28022 in the ‘K’ period and stayed below it for the last 2 periods closing the day at 27853 leaving a Trend Day down.