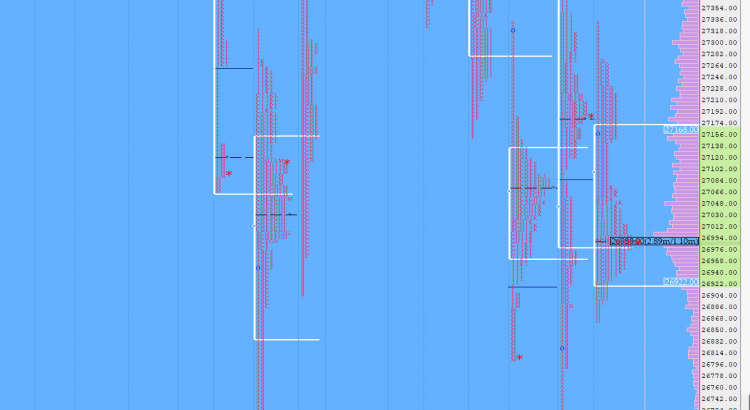 NF gave an almost OL start at yVAH of 10882 indicating that it wanted to probe higher which it did as it got above previous day high of 10905 making a high of 10948 in the IB while leaving a small buying tail from 10904 to 10879. (Click here to view the profile chart for September NF for better understanding) The auction then made a RE (Range Extension) in the most dreaded ‘C’ period yet again as it went on to tag the 1 ATR objective from yesterday’s FA of 10785 as it made a high of 10960 but could not sustain above it as the ‘D’ period broke below the lows of ‘C’ indicating that the drive open on low volumes is losing its strength. Breaking of VWAP on a drive open mostly leads to the test of the other extreme and today was no different as NF trended in the ‘E’ period lower once it closed below VWAP is it not negated the buying tail getting back into the previous day’s range but went on to make new lows for the day at 10873 which in turn confirmed a new FA of 10960 – the third one in 5 days in the new series. NF continued it’s probe down for the next 2 periods as it tagged the yPOC of 10845 while completing the 1.5 IB move and found support there making a balance for the remaining part of the day with a slow probe higher as it tagged VWAP in the ‘K’ period but could not scale above it leaving yet another Neutral Day which also resembles a DD (Double Distribution) profile with the HVN of the lower distribution forming at 10870 which will be the immediate support in the coming session with 10940 being the reference on the upside if NF manages to get into the upper distribution. NF is in the process of forming a nice balance over the last 3 days (click here to view the composite) and could give a move away from here in the coming session(s). 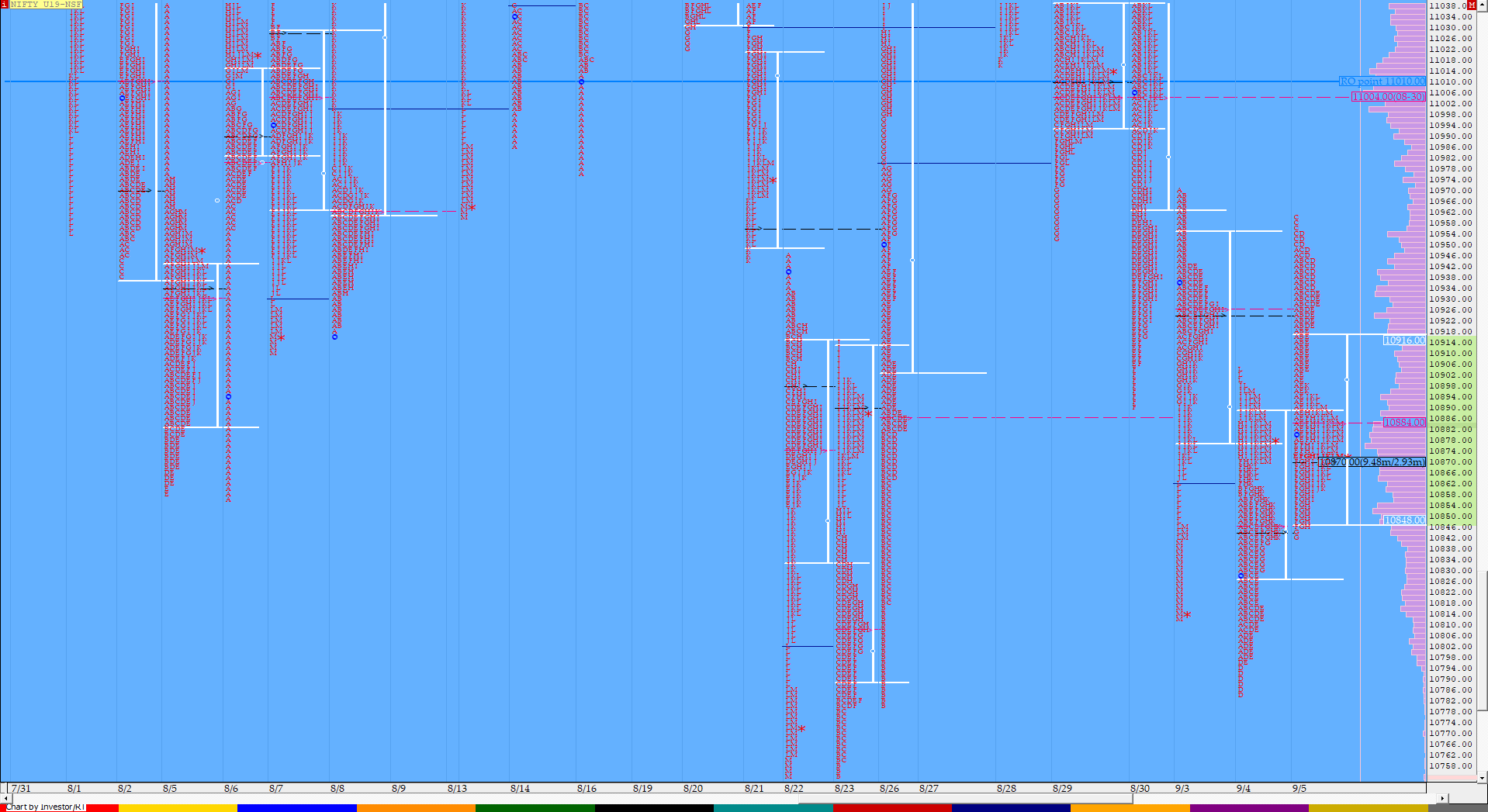 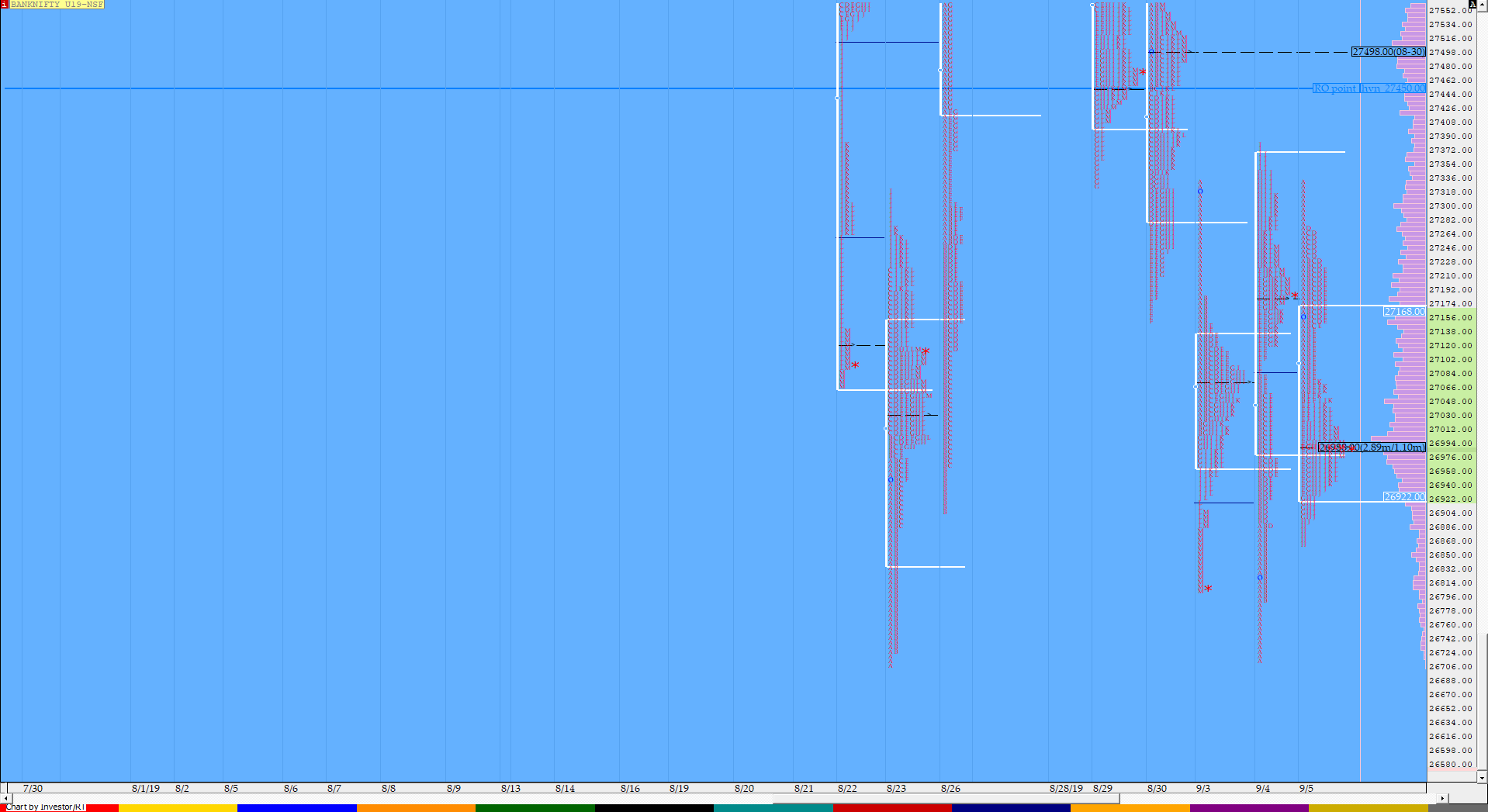 BNF also seemed to give a drive higher at open all be it on lower volumes from the yPOC of 27180 as it probed higher in the ‘A’ period tagging high of 27335 but was swiftly rejected as it could not get above the yVAH and broke below VWAP inside the first 15 minutes which meant failure of the drive after which it trended lower making new lows of the day and tagging 27050 in the IB. (Click here to view the profile chart for September BNF for better understanding) The auction then gave a retracement to VWAP and scaled above it as it made a high of 27276 in the D period but once again was rejected after which it trended lower for the next 4 periods making multiple REs (Range Extension) completing the 1.5 IB move of 26908 in the G period & making a lower low of 26862 in the H period which made an outside bar where the OTF (One Time Frame) move downside came to an end. BNF then made a balance for the rest of the day staying below VWAP as it left a pull back high of 27075 before closing at the developing HVN of 27000. BNF left an inside bar on the daily and is also forming a 3-day balance like NF so has a good chance of giving a move away from here in the coming session(s).