NF had made a range of 193 points the previous day which was the biggest in almost 3 months and this imbalance called for a balance to return to the auction as it opened with a big gap up of 85 points and not only that but also drove higher as it entered the previous day’s selling tail of 12138 to 12256 while making a high of 12182 in the Initial Balance (IB). The range however contracted in the first 3 periods with the C period making an inside bar of just 18 points which suggested that the trade facilitation at these higher levels was getting poor and more confirmation of the probe reversing came as NF closed below VWAP in the ‘C’ period. Failure of VWAP in an Open Drive leads a quick move to the other extreme which is what happened in the ‘D’ period as the auction negated the entire morning tail to make a range extension to the downside as it made new lows at 12094 stalling just above the previous day’s Trend Day VWAP of 12088. NF then remained in the range of ‘D’ for the next 3 periods as it stayed below VWAP with the range contracting once again as the ‘G’ period made a narrow inside bar of just 19 points indicating that another range expansion for the day could be on the cards. The ‘H’ period then began by probing higher and looked like could move towards the IBH but was swiftly rejected at VWAP as it left a Pull Back High at 12139 after which it went on to make a fresh RE to the downside followed by another one in the ‘I’ period as NF completed the 1.5 IB move as it made lows of 12049 taking support just above previous day’s HVN of 12040 as the ‘I’ period closed at 12071 leaving a small buying tail at lows from 12071 to 12049 hinting that the day’s low could be done. This view was strengthened as the next 2 periods probed higher almost tagging VWAP in the ‘K’ period as it made highs of 12115 but once again was rejected as it made a quick fall of 40 points in the ‘L’ period where it made lows of 12074 taking support just above the buying tail of the day and made another trip back to VWAP in the closing 30 minutes to close around 12115 which was also now the dPOC for the day. On the daily time frame, NF made an inside bar with Value also completely inside previous day’s Value and we now have a 2 day composite with Value at 12042-12120-12132 along with signs that there are 2 big opposite forces fighting out there as the volumes of the last 3 days have been above average and also been increasing so the auction can remain in this 2 day composite for some more time before giving the next move away. 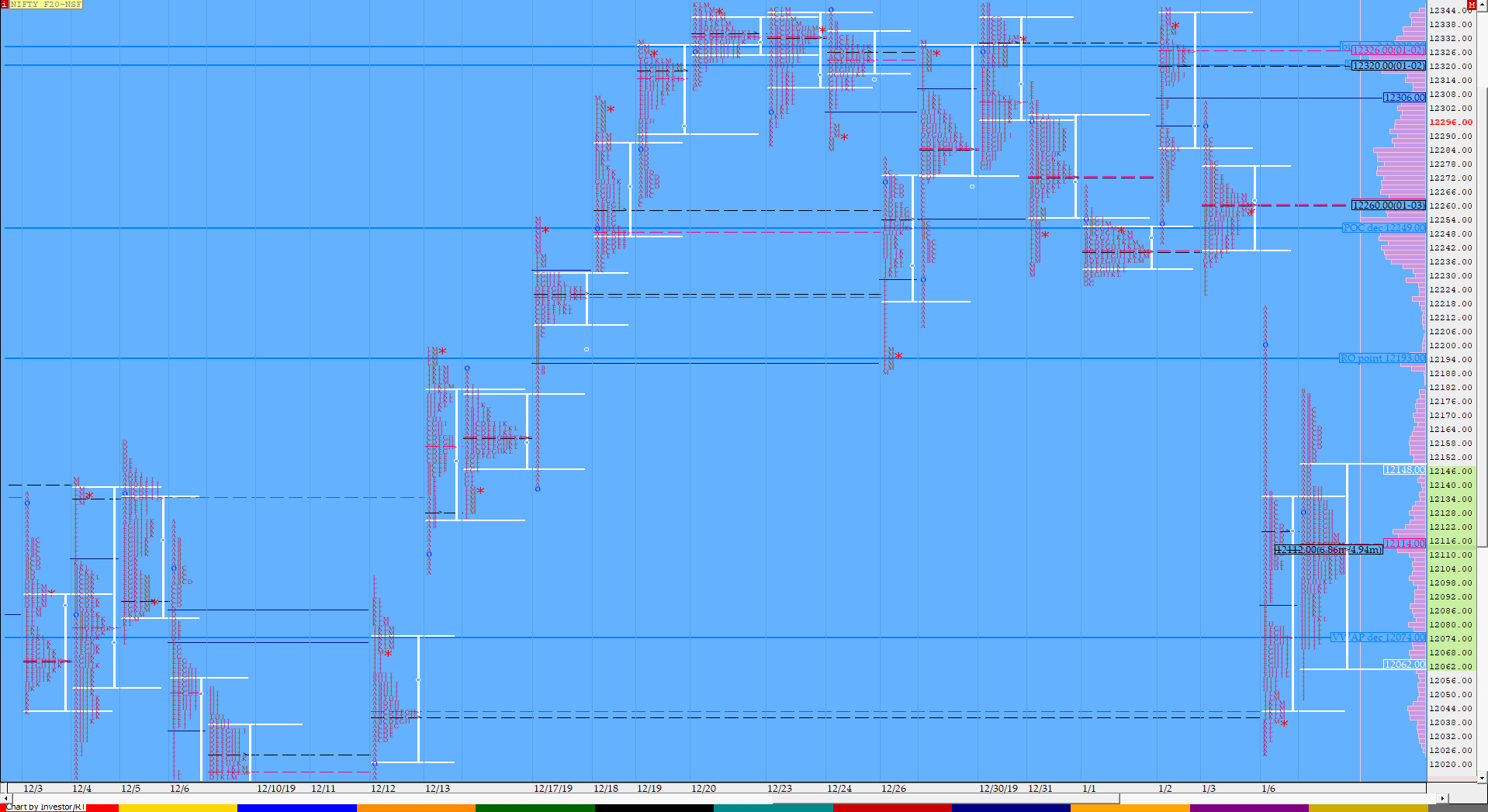 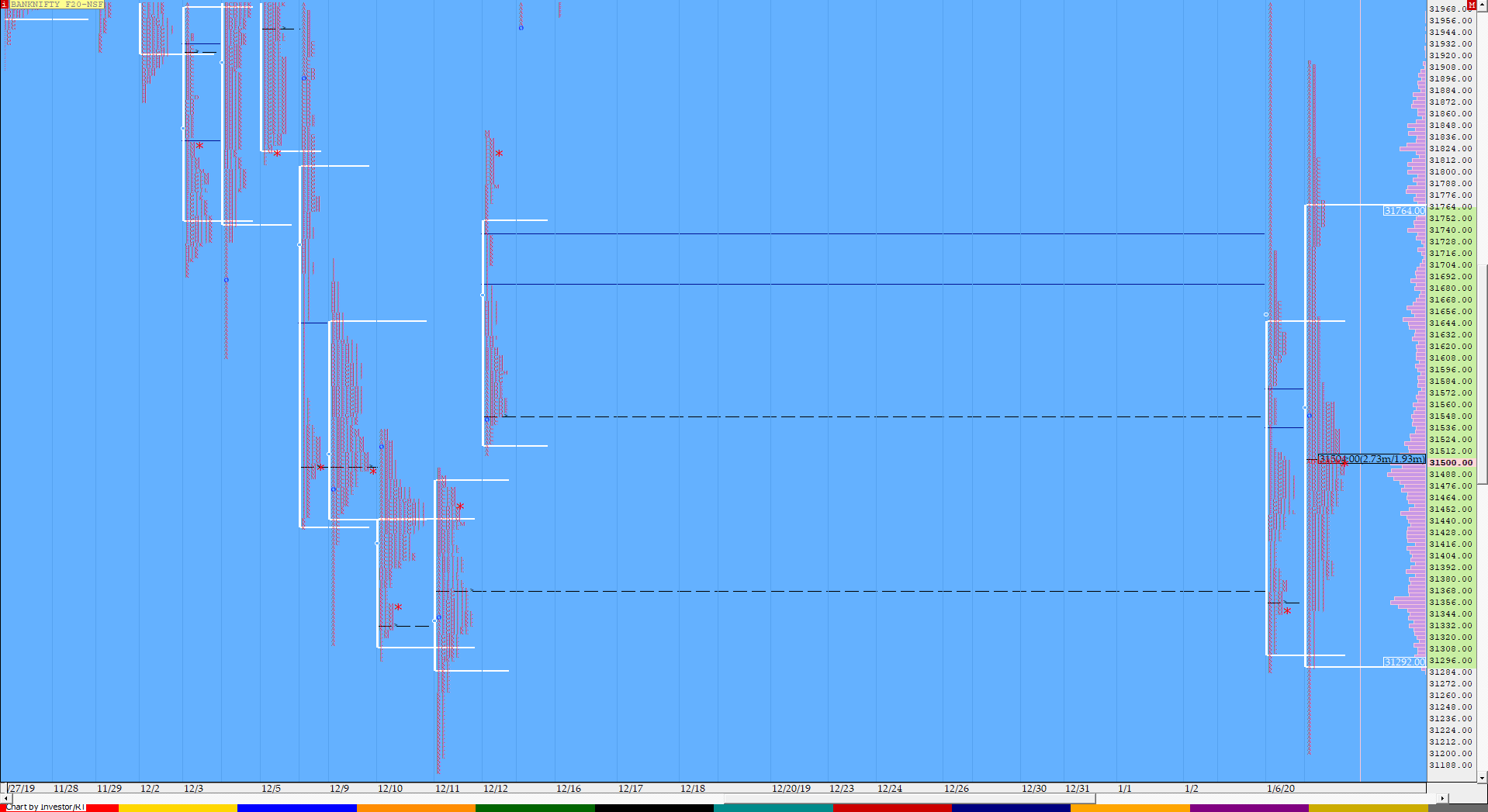 Similar to NF, BNF also opened with a big gap up of almost 200 points after making a 3-month high range of 738 points the previous day as it opened above the Trend Day VWAP of 31519 and drove higher in the IB eating up half of the big selling tail of 31716 to 32161 while making a high of 31916 in the IB but broke below VWAP which was a sign that there was no new demand coming in. The ‘C’ period then made a narrow range inside bar of just 70 points which was followed by a trending move to the downside starting from the ‘D’ period as the auction made multiple REs lower till the ‘I’ period as it not completed the 1.5 IB objective of 31367 effectively closing the gap up but also went on to test the previous day’s low as it made lows of 31290. However, BNF also left a small tail at lows in the ‘I’ period which led to a move back to VWAP as it made a high of 31532 in the last 15 minutes before closing the day around the dPOC of 31500. There was a freak tick of 31200 in BNF at open which can be ignored as there was no volumes there so effectively speaking, BNF also made an inside day and like NF has given a 2-day composite with Value at 31319-31490-31661 with volumes also increasing from the last 3 days with yesterday’s volumes of 47.6 L being the highest in the last 2.5 months suggesting that the range is likely to be on the higher side in the coming sessions.