Yet again, NF did not give a follow up to a Neutral Extreme profile as it opened with a gap up of 200 points but got stalled right at the TPO POC of previous day of 8508 and probed lower in the ‘A’ period and took support right at the extension handle of 8357 which was an important signal. The auction then made an inside bar in the ‘B’ period leaving the narrowest IB range of just 148 points in 20 days but left a buying tail from 8416 to 8357 which confirmed that the PLR is to the upside. NF then made the dreaded ‘C’ side extension but got accepted above the IBH and though it did get back into the IB in the ‘D’ period and went on to tag VWAP, it was swiftly rejected which led to a trending move on the upside after it confirmed an extension handle at 8549 and went on to complete the 2 IB objective of 8653 in the ‘J’ period and in the process negated the FA of 8640. The auction continued higher for the next 2 periods as it hit 8715 in the ‘K’ period where it seemed to be stalling as it left similar high of 8712 in the ‘L’ period and this exhaustion led to a big long liquidation move into the close as NF shed 130 points to hit 8581 before closing the day at 8621 leaving a Double Distribution profile with the extension handle of 8549 separating the 2 small distributions of the day.

On the bigger time frame, NF has been forming a nice 4-day balance from 26th Mar with Value at 8455-8668-8745 and will need some initiative activity to move away from here. You can view the MP Lite chart of the 4-day composite here. 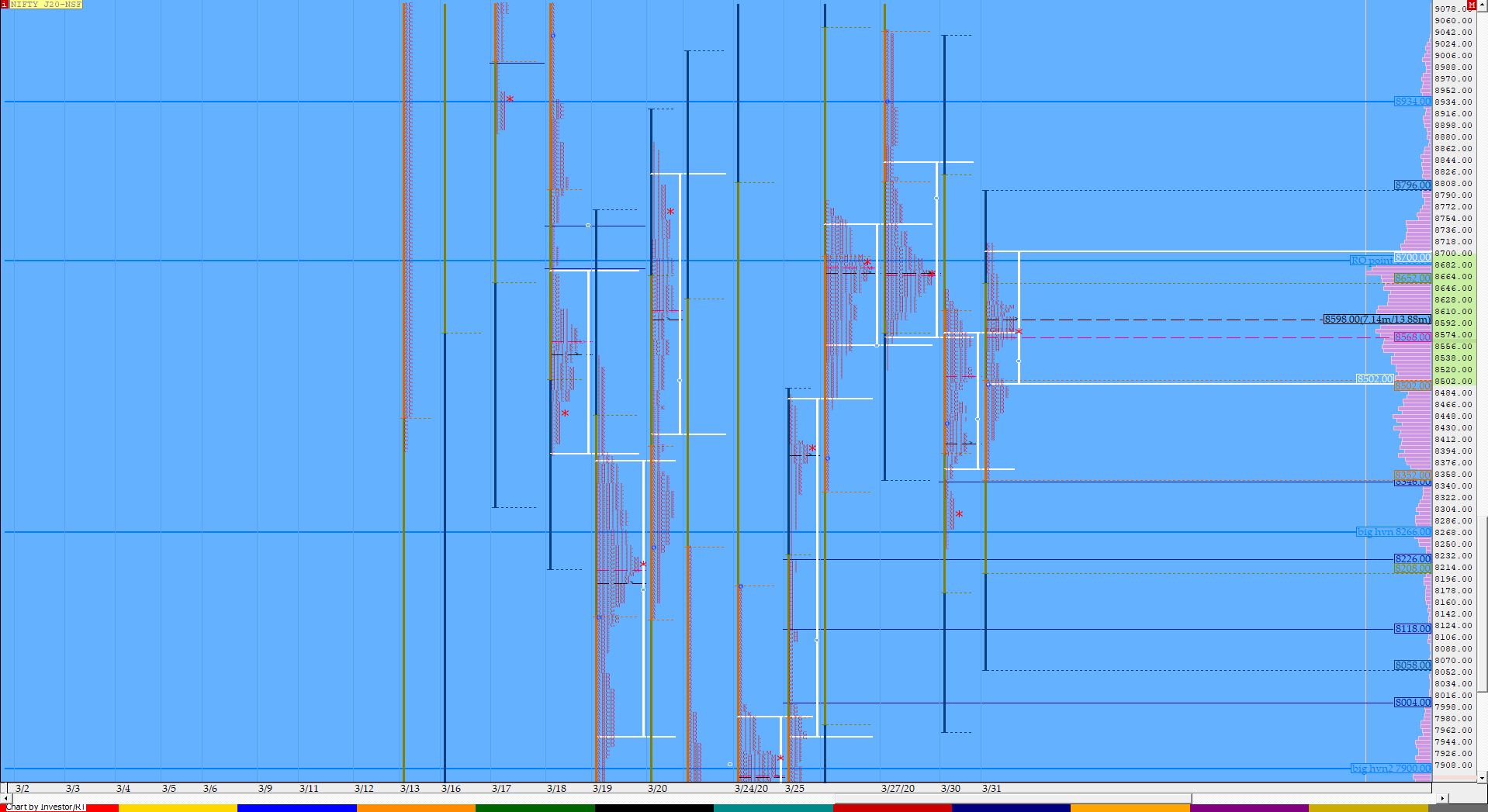 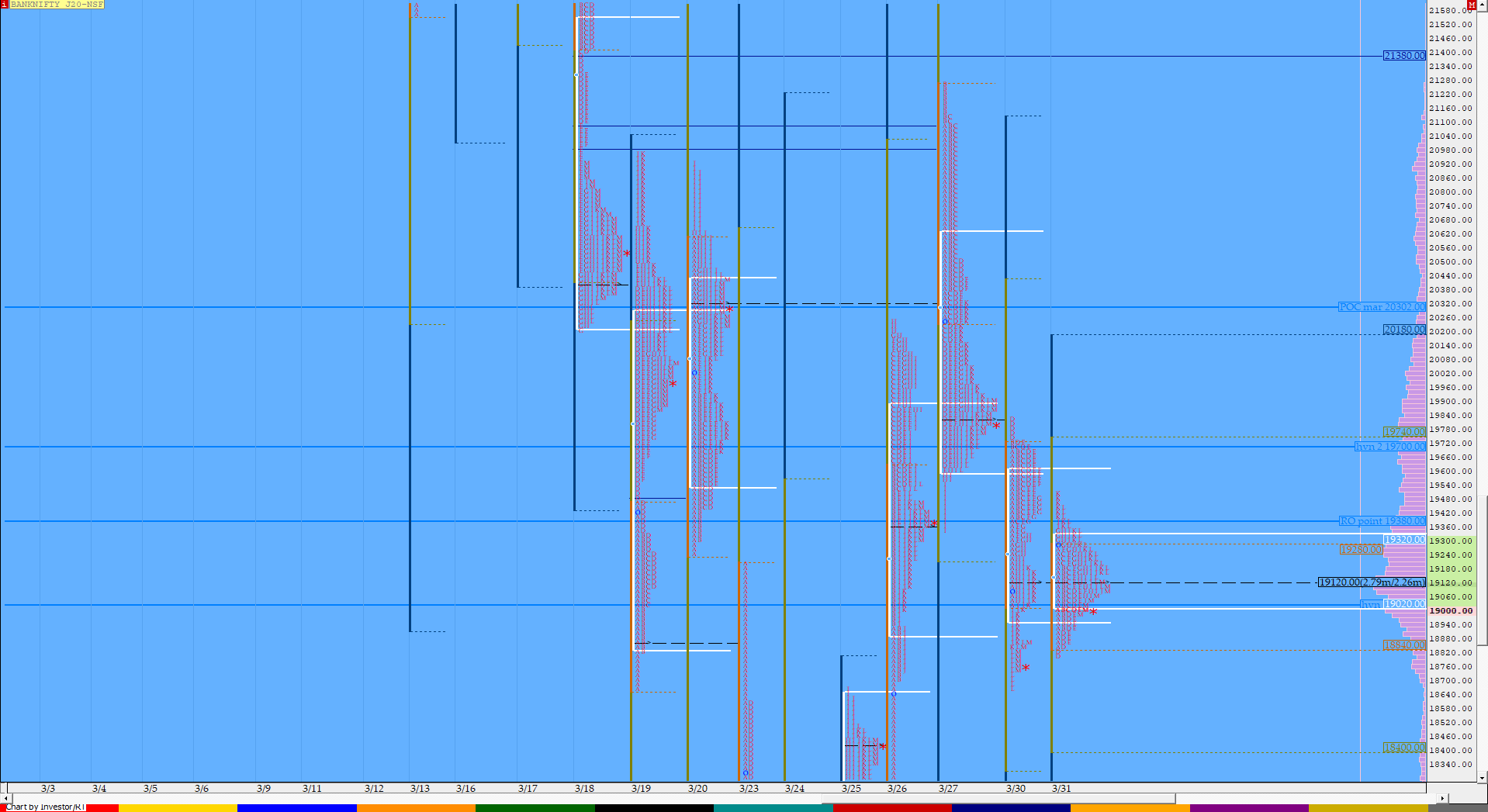 BNF also opened higher but was also an almost OH start at 19285-19299 after which it probed lower making lows of 18851 in the ‘A’ period and as in NF, the ‘B’ period made an inside bar but left singles at both ends with the selling tail from 19190 to 19299 being slightly more prominent. The auction then made an attempt to get into this tail in the ‘C’ period but left a PBH at 19240 and led to a marginal new day low being made in the D period at 18817 which was promptly rejected back into the IB. BNF then remained in previous day’s Value for rest of the day as it probed higher confirming a FA at 18817 against the FA of 19820 it had left yesterday which was also incidentally in the ‘D’ period itself. BNF made highs of 19500 in the ‘K’ period but could not complete even the 1.5 IB objective inspite of the relatively small IB range and this led to a big move down to 18990 in the last 45 minutes before it closed the day at 19135 leaving a Neutral Centre profile which was also an inside day with a close around the 2-day overlapping POC so the auction looks set to give a move away from here but needs to take out one of the FAs of 18817 or 19820.

BNF has also been forming a bigger balance from past 4 days and the composite chart on MP Lite can be seen here.