NF opened in previous day’s spike zone of 12069 to 12104 but stayed above the HVN of 12080 while taking support at 12091 after which it got above PDH (Previous Day High) and continued to probe on the upside making a high of 12138 leaving the narrowest IB (Initial Balance) range of just 47 points in over 2 weeks. The auction then broke below VWAP & moved lower for the next 3 periods as it made an attempt to make a RE (Range Extension) to the downside for the first time this week in the ‘E’ period as it tagged new lows for the day at 12087 but was swiftly rejected leading to a big move on the upside in the ‘F’ period as NF not only got above VWAP but went on to make a successful RE at the other extreme confirming a FA (Failed Auction) at lows as it tagged the 1.5 IB objective of 12161 but got stalled in this zone after making a high of 12167 in the ‘I’ period as the supply from the 29th Jan profile seem to have returned as the VWAP & VPOC of that day at 12176 & 12189 were defended. NF made a dip below VWAP in the ‘J’ period as it left a PBL (Pull Back Low) at 12102 before closing the day at the dPOC of 12132 leaving a nicely balanced Neutral profile with yet another day of higher Value. Balance seems to have returned after the imbalance seen this week which has been trending higher on all 4 days till now so we could expect another range bound day in the next session before the auction gives the next round of imbalance. 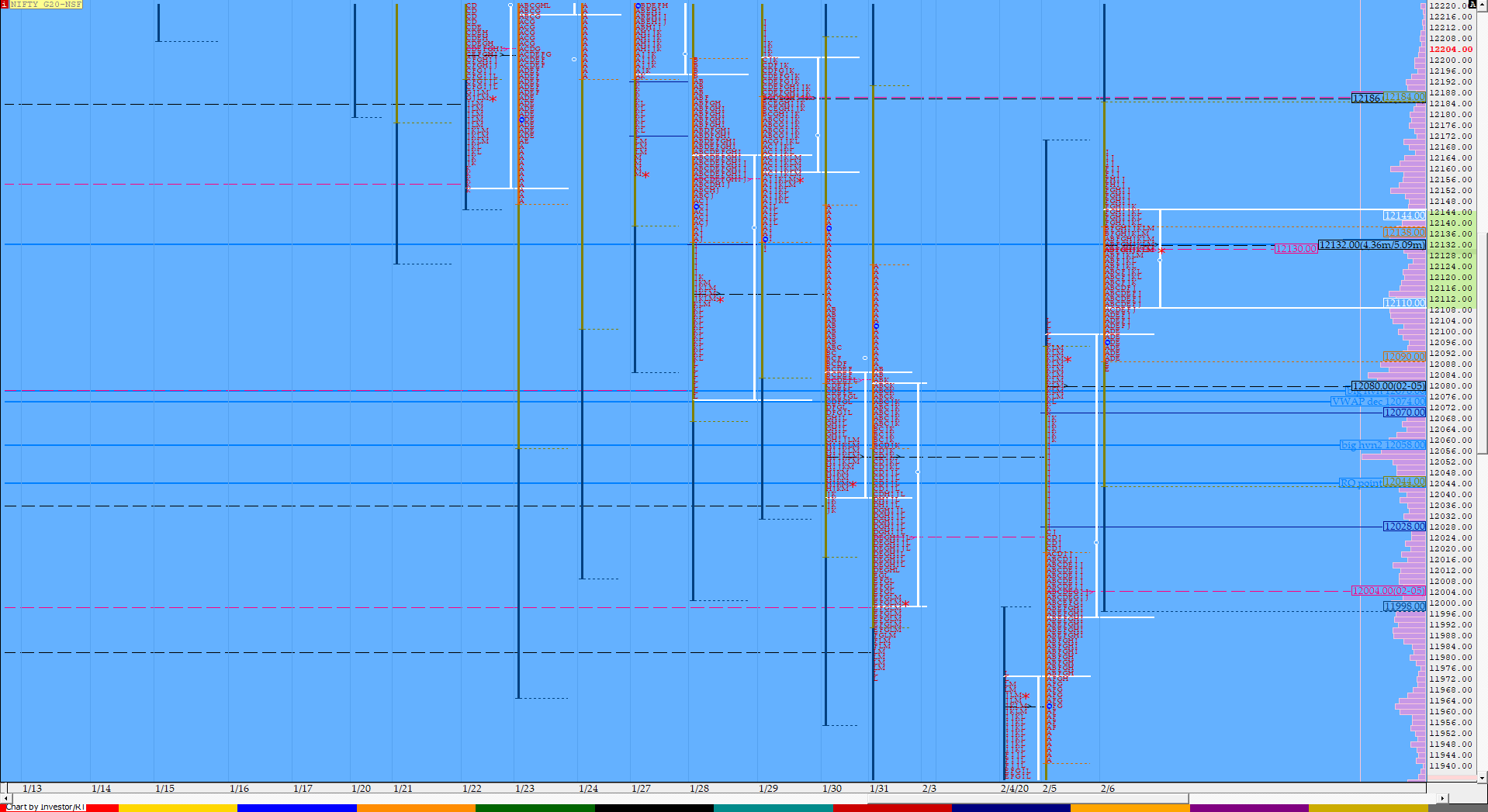 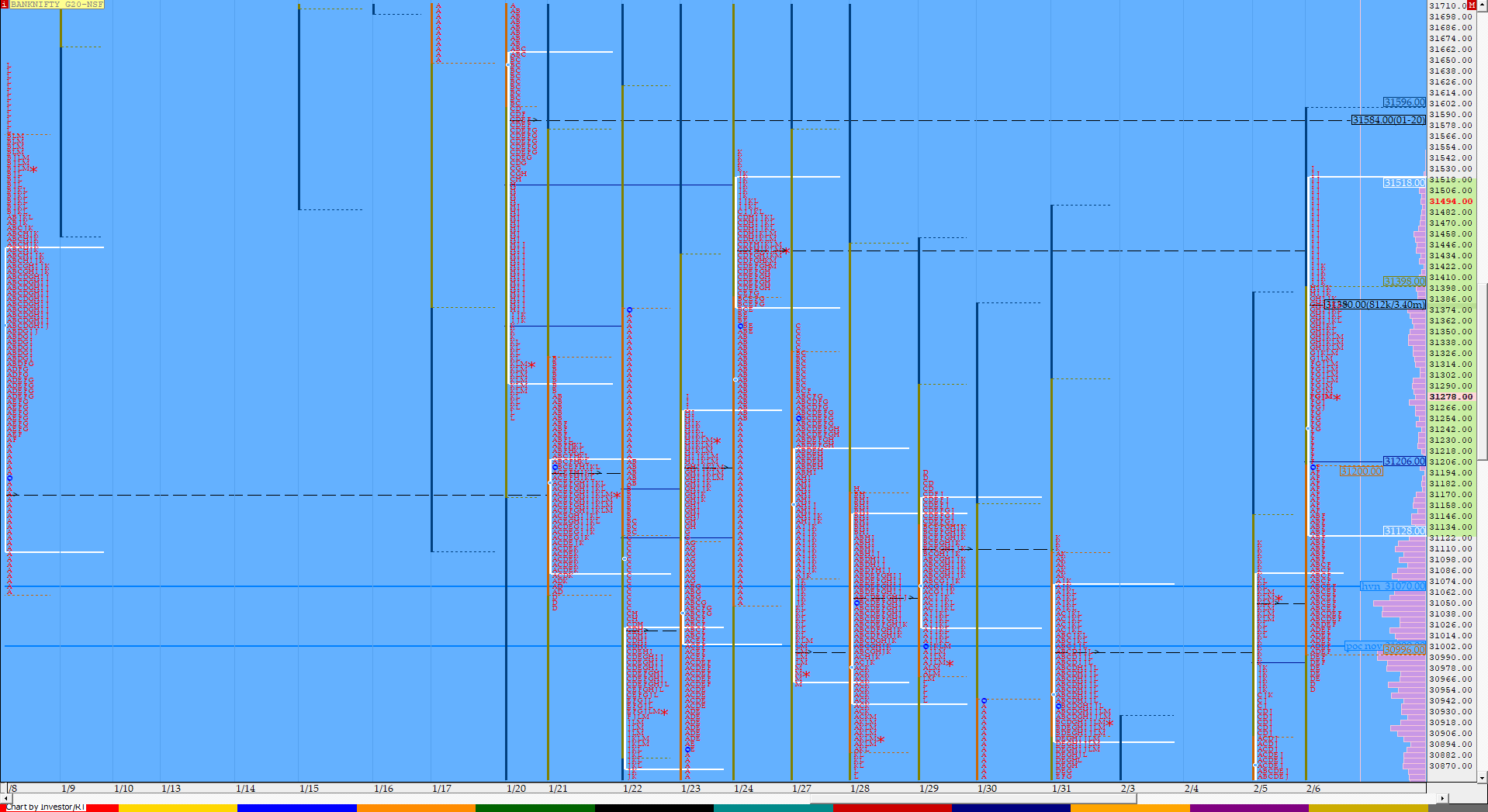 BNF opened with a big gap up & a freak OH tick of 31200 and probed lower to get back into the previous day’s range & test the Neutral Extreme reference of 31116 to 30980 as it took support at 31000 in the IB. The auction continued to make Value in this spike zone for the first part of the day & even attempted a RE to the downside in the ‘E’ period as it made lows of 30956 but was swiftly rejected which meant that the previous day’s extension handle buyers were still active. BNF then stayed inside the IB in the E period getting back to VWAP & made a big move in the ‘F’ period just like NF as it made a successful RE higher confirming yet another FA of the new series at lows and kept trending higher for the next 3 periods completing the 1 ATR objective of 31453 as it tagged the 20th Jan Trend Day VWAP of 31500 while making a high of 31530 but just like it did on 24th Jan, was unable to stay above it and this led to a retracement back to VWAP into the close as it left a PBL at 31271 before closing the day at 31332 which was much below the dPOC of 31380 leaving another Neutral Day though the day’s profile also resembles a DD (Double Distribution Trend Day) with 2 balances being separated by a buying tail from 31247 to 31165 if we ignore the freak OH tick of 31200 and this zone of singles will be the reference for tomorrow to see if BNF continues to probe higher or starts to form a balance.