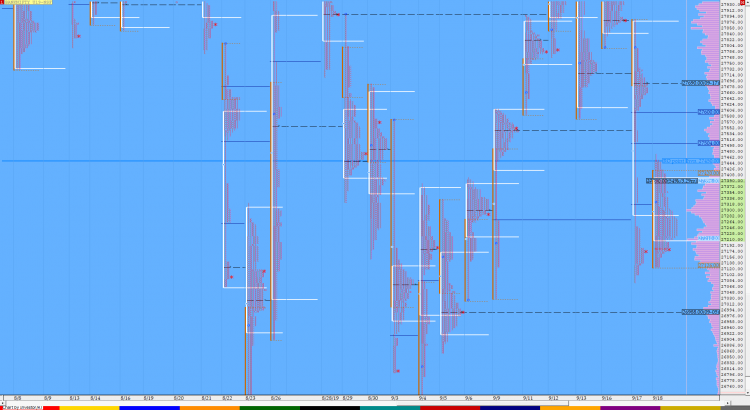 A follow up after a Trend Day is rare as imbalance leads to balance & vice versa so after the Trend Day Down of Tuesday, it was only apt that the auction took a breather as it made a nice Gaussian profile staying inside previous day’s range but below the Trend Day VWAP of 10904. NF opened higher but was immediately rejected as it made highs of 10896 to probe lower in the IB (Initial Balance) as it broke below the yPOC of 10840 while making a low of 10826 but could not sustain below it indicating some demand coming in at lower levels. (Click here to view the profile chart for September NF for better understanding) The auction then stayed inside the IB range all day with a failed attempt to make a RE (Range Extension) higher in the ‘I’ period where it made a new day high of 10900 leaving a probable FA (Failed Auction) as NF then probed lower but once again took support at the HVN of 10840 while it left a PBL (Pull Back Low) of 10838 in the ‘L’ period. The auction has moved away from the 5 day balance with an initiative tail from 11017 to 10982 (as can be seen in the above link) so the PLR remains to the downside. On the larger time frame, NF (Sep series) has been forming a 32-day composite right from 31st July (click here to view the composite chart) with Value at 10880-11025-11095 so the immediate reference to the upside would be 10880 and an initiative move away from this zone could signal the start of a new IPM to the downside. However, sustaining above 10880 NF could probe higher to first check the extension handle & Trend Day VWAP of 10905 above which it could tag the Trend Day PBH of 10940 & the selling tail of 10982 to 11025. 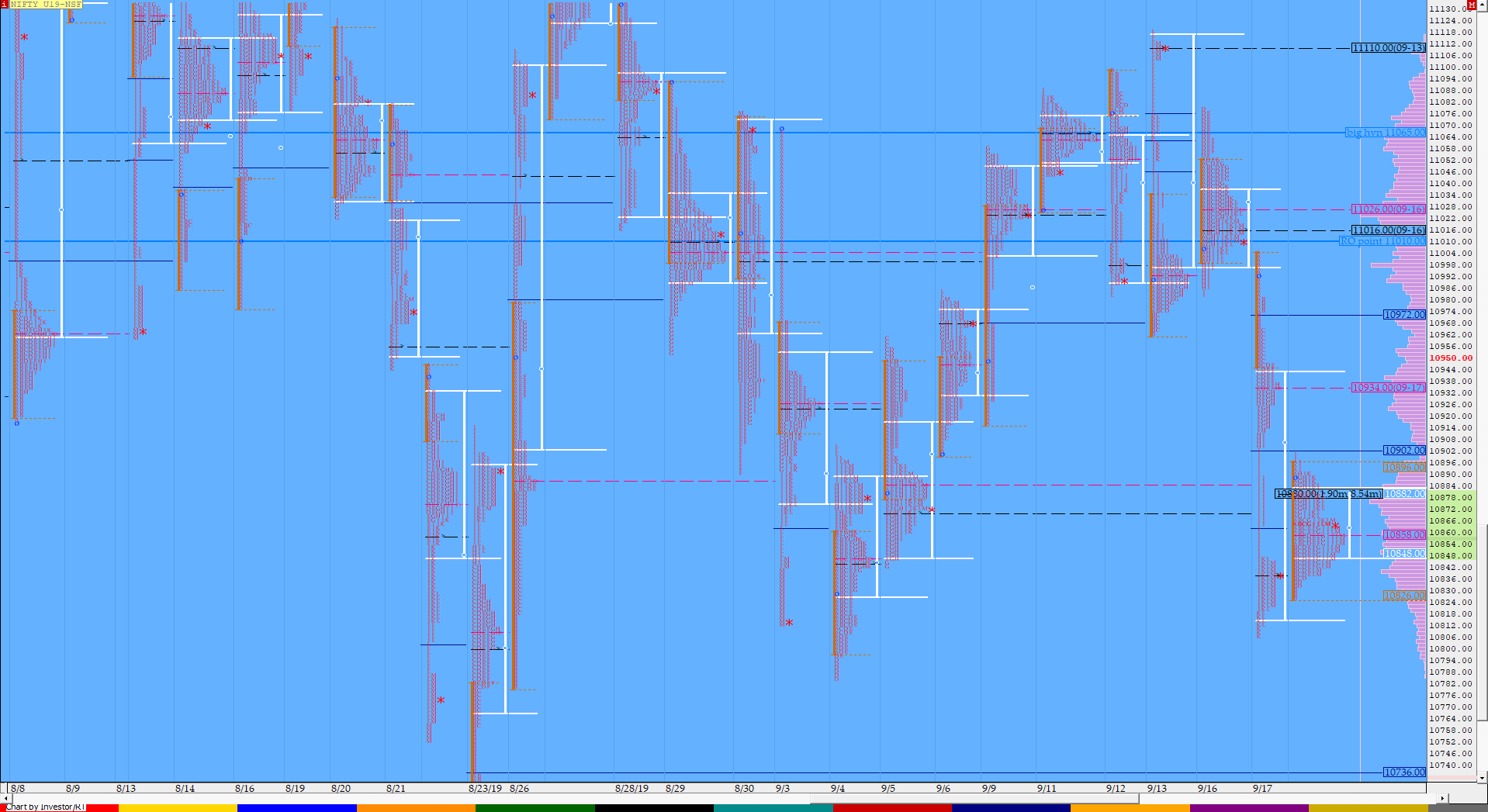 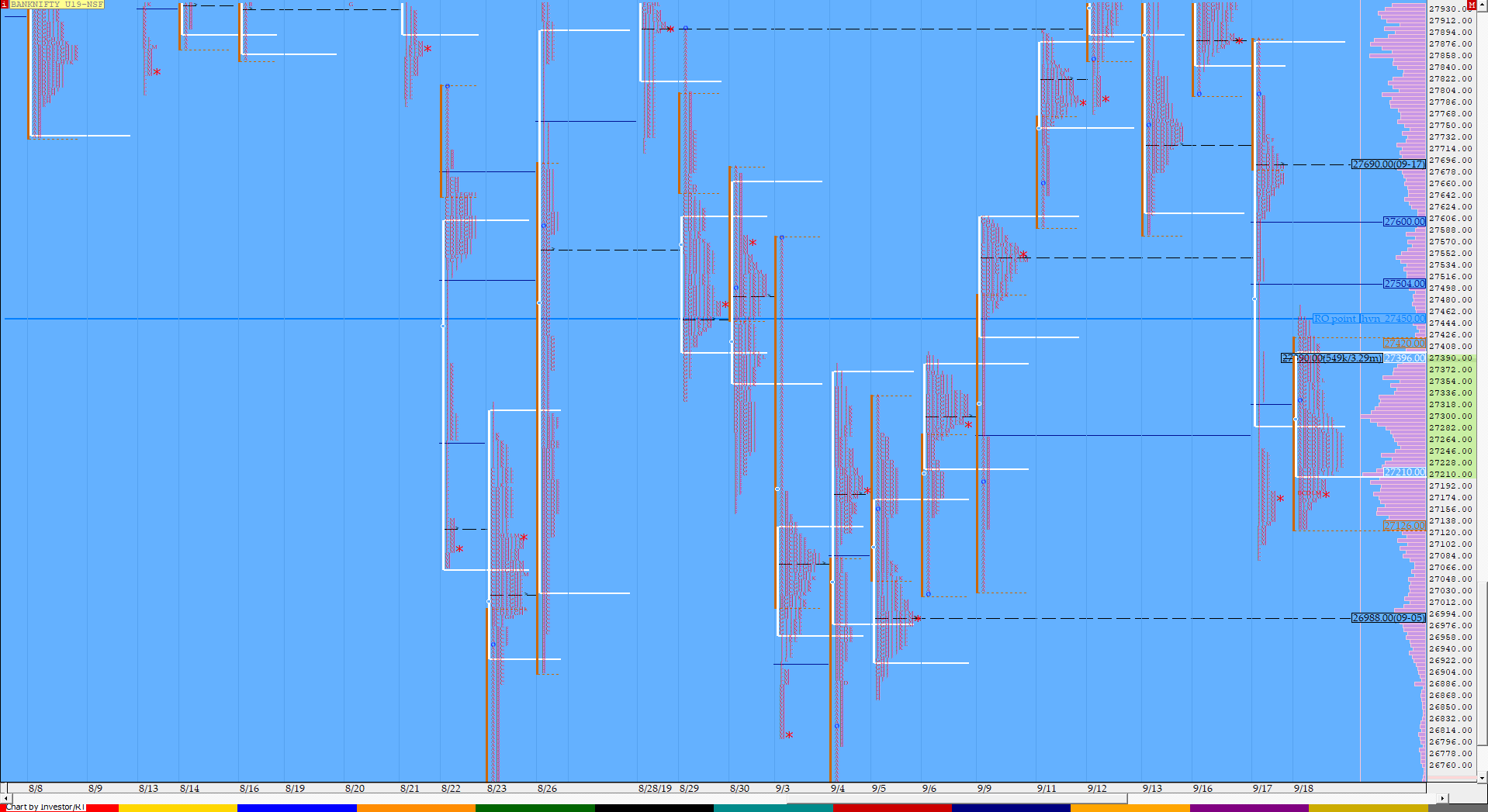 BNF gave a gap up of almost 200 points and probed higher making a high of 27423 in the opening minutes but faced rejection in the mid-profile selling tail of 27400 to 27515 from the previous day’s Trend Day Down as it reversed the auction and went on to close the gap in the IB while making a low of 27130. BNF was then confined to a narrow range around VWAP for the next 4 periods with the range also contracting as each TPO was inside the previous period till the ‘F’ period and this led to a range expansion in the ‘G’ period as the auction probed higher & went on to make a RE to the upside and followed it up with higher highs in the next 2 periods making highs of 27470 in the ‘I’ period but failed to sustain above IBH indicating lack of new buyers & this led to a test of VWAP as the auction made a low of 27210 leaving an outside bar of 260 points. BNF then made another rotation to IBH in the ‘K’ period leaving a PBH of 27410 and then went on to break below the range of ‘I’ in the closing 30 minutes as it briefly broke the IBL too while making a new day low of 27127 which also confirmed a FA at highs but would need re-confirmation in the next session as the close was well above the IBL. BNF has left an inside day with a balanced profile with failed attempts at both ends of IB so could be in for a big move once again in the coming session(s).