As mentioned in the previous report, NF had made a balance at the edge of the monthly composite yesterday and today at open it made an attempt to get above the composite VAH of 11133 which was PDH (Previous Day High) also but was rejected just below it as NF made a high of 11132 which was a indication that the auction is still not ready to move away from this balance hence turning the PLR (Path of Least Resistance) to the downside as NF went on to confirm a small selling tail from 11103 to 11132 in the IB (Initial Balance) marking a low of 11045 in the ‘B’ period. (Click here to view the profile chart for August NF for better understanding) The auction then gave a retracement to VWAP over the next 3 periods as it tagged 11089 in the ‘E’ period but was swiftly rejected confirming that the PLR still remains down after which starting from the ‘F’ period onward, NF made multiple REs (Range Extension) lower in 4 of the 6 periods as it made a low of 10983 in the ‘J’ period taking support just above the extension handle of 10975 it had left on 26/08 (Monday). The ‘K’ period then made a narrow range inside bar with similar lows of 10984 and these poor lows meant that probe to the downside was getting exhausted which could either be because the extension handle buyers were coming back to defend that level or that the inventory was getting too short and this along with the fact that the dPOC of the day was placed much higher at 11058, the auction completed the 45 degree Rule in the ‘L’ period as it got back above VWAP and the dPOC and made a high of 11068 before closing around VWAP leaving a ‘b’ shape profile for the day which meant that weak longs could have been taken out today but buyers came back at lower levels. NF will need to stay above the composite POC of 11061 for a probe higher towards the composite VAH and would get weak below 11040. 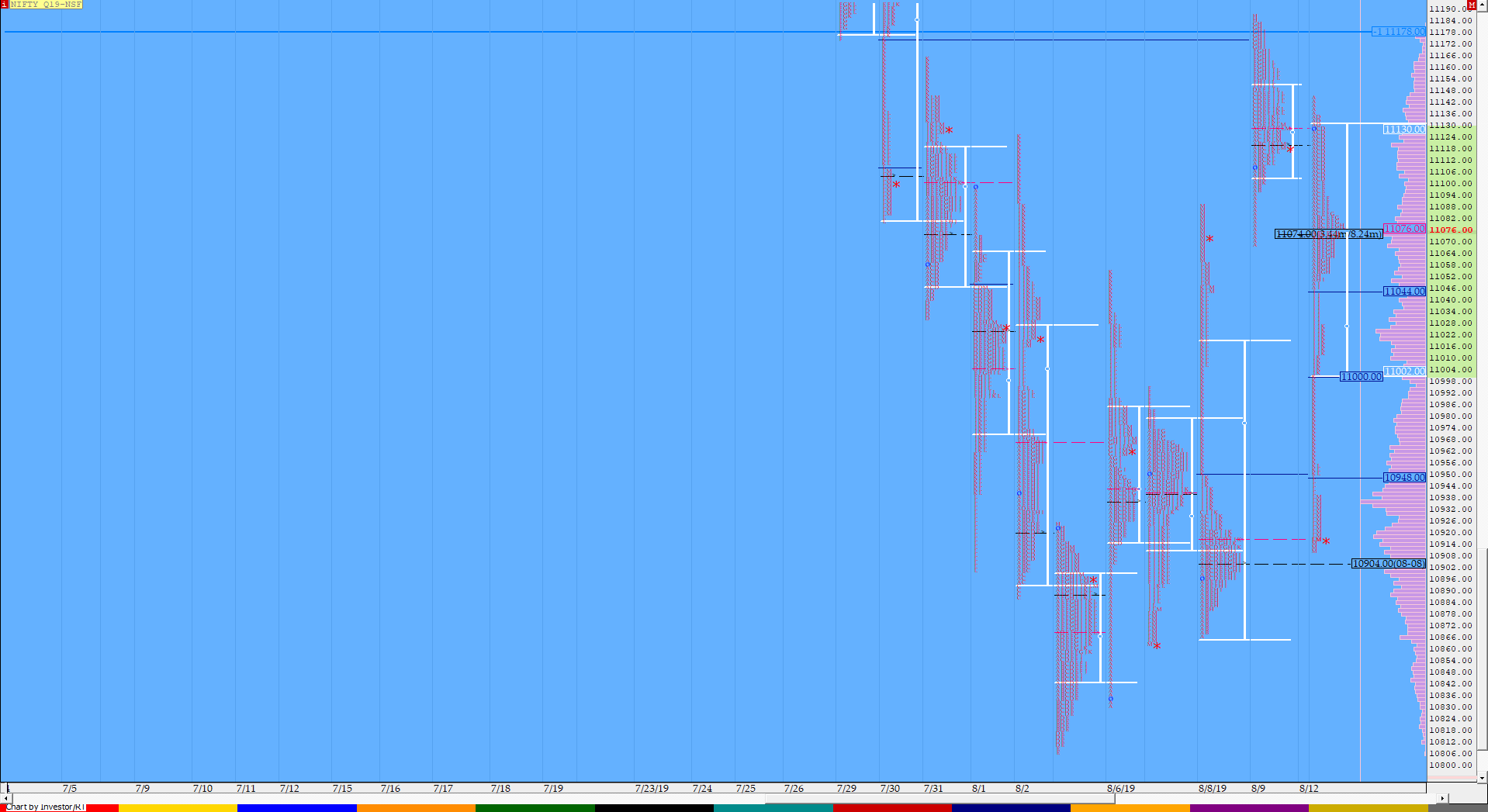 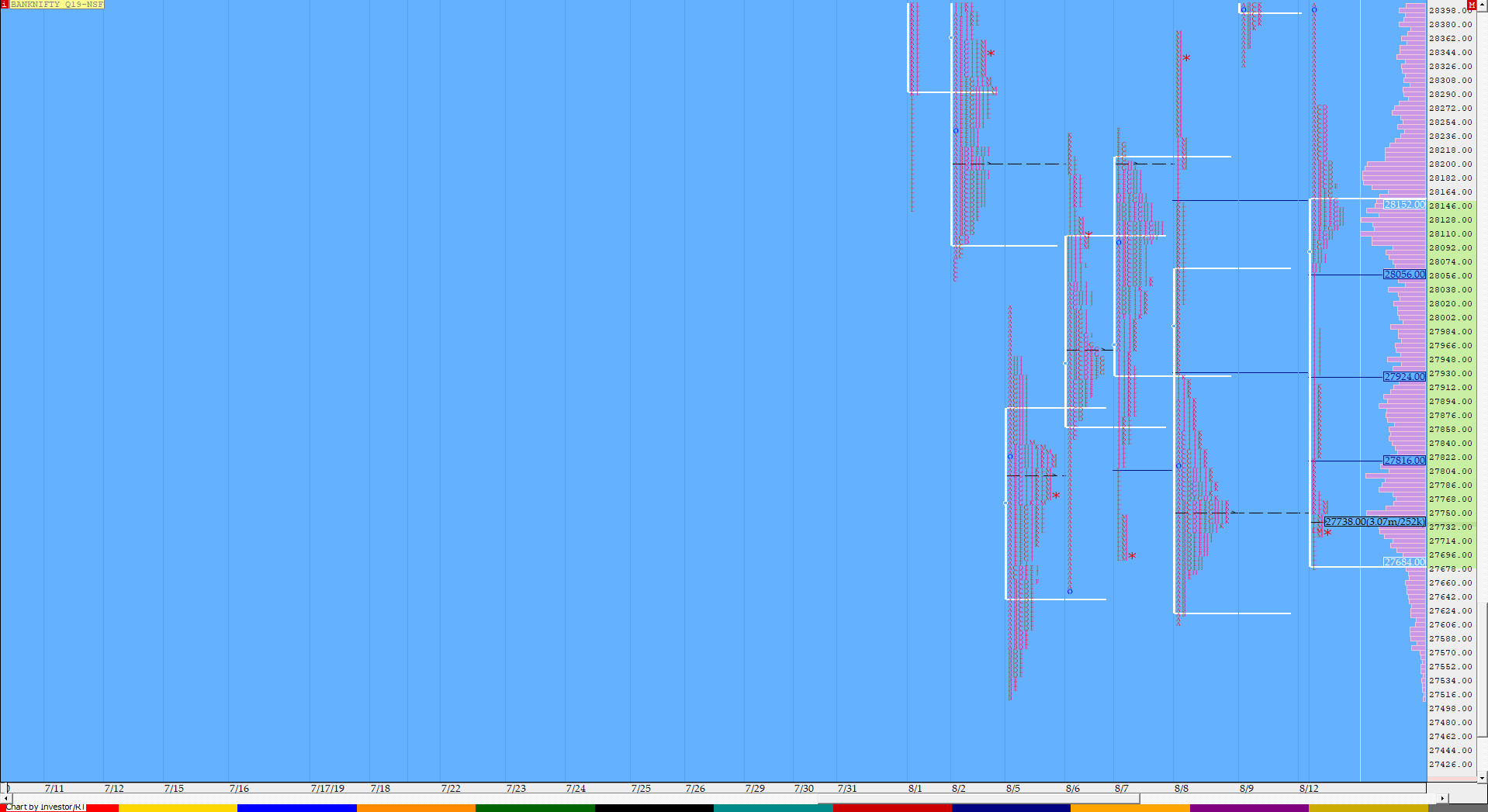 BNF opened lower and stayed below the yPOC of 28140 in the ‘A’ period and went on to probe below the yVAL of 28005 which was a confirmation that the PLR would be to the downside unless it got back into previous day’s Value which did not happen for the entire day. The auction left a small selling tail from 28118 to 28028 in the IB after which it attempted an RE lower in the ‘C’ period but was rejected leaving a probable FA at 27867 and went on to test VWAP as it made a high of 27999 in the ‘E’ period but could not sustain above it and got rejected from just below the yVAH of 28005 re-confirming that the main probe for the day continues to be down. BNF then trended lower over the next 5 periods making multiple REs lower almost tagging the 2 IB objective down as it made a low of 27642 in the ‘J’ period testing the singles & extension handle it had left on 26/08 (Monday). The ‘K’ period made a narrow range inside bar after which the ‘L’ period made a fresh RE lower making new lows for the day at 27621 but was swiftly rejected and this led to a inventory adjustment move as the auction got back to VWAP making a high of 27881 before closing at the composite VWAP of 27831 while leaving a ‘b’ shape profile for the day. BNF has made a nice composite from 05/08 with Value at 27561-27930-28277 and the profile chart for the same can be viewed here.